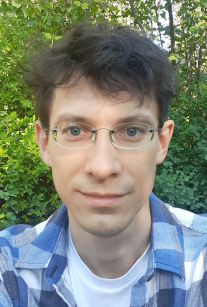 read
the complete resume
below

I'm a Python & Web Developer and computational linguist. I have worked in Natural Language Processing (NLP) and I'm experienced in data processing and analysis, and in machine learning. I mainly use Python and its libraries and frameworks (Django, Flask, Pandas, TensorFlow...), but I also develop with other languages such as Java, PHP, Javascript...

I am experienced in:

I have published several scientific articles, both in English and French, including in international conferences.

I have taught Python, HTML/CSS/Javascript, Linux commands but also linguistics to college and university students.

I am always excited to learn new things (especially technical skills like programming languages and frameworks), and to explore new opportunities!

For the Master degree “Language Technologies” (M1 et M2, about 15 students per class):

For the Bachelor degree in Education Science (about 120 students):

This was an internship for the Democrat project (Description and modelling of reference chains: tools for corpus annotation (with diachronic and cross-linguistic approaches) and automatic processing) from the French National Research Agency (ANR-15-CE38-0008) (go to website).

Highlights of the research:

Main classes (more information in the presentation booklet from the University, page 4):

I wrote about 150 reference sheets on Ancient Greek grammar and linguistics (419 pages).

Other education and experiences

I was also the secretary for two associations: the “Centre de Création Image et Son” in Colmar (an association for short movie directors and photographers, about 60 members, from 2002 to 2007); and the “Amicale des Étudiants en Philosophie de Strasbourg” (a student association, from 2005 to 2006). I made the website (at the time) of both associations.

I also started studying history at Marc Bloch University (Strasbourg II), but I got ill and had to stay home for a while. I used this time to teach myself how to code, especially in C, C++, C# and in Perl. Some of my projects, especially those in C#, date back to this period. I also teach myself Ancient Greek and Latin, before going back to school in 2012.

I am proficient with:

I have also significantly used:

I have also basic knowledge of other programming languages, such as Go, Lua, Scala...

I have a master degree in French linguistics.

I have given courses on linguistics at University level.

I have more specifically worked on: