This page presents various representation of coreference relations between linguistic expressions of a text.

[Sophia Loren] says [she] will always be grateful to Bono. [The actress] revealed that the U2 singer helped [her] calm down when [she] became scared by a thunderstorm while travelling on a plane. (This example is from Mitkov's Anaphora Resolution book.)

There is a second chain for the entity "Bono".

Each expression that is part of a coreference chain is called a mention.

The most obvious way is to frame expression and add either a chain-specific index or color, that is, a identifier or a color for each chain, as can been seen in the following examples:

Notice that singleton mention (that is, mention with no relation to any other mentions) are in gray.

These representations is useful to look at the actual textual content of the expressions, but they can be difficult to read if there are too many mentions or chains.

If the textual content is not as important as the general form of the coreference chains, then expressions may just be replaced by colored symbols. In the following figure, each symbol represents a different mention, in consecutive order of appearance (the beginning of the text is at the left, the end of the text at the right). A same color/shape indicates that the mentions belong to the same chain:

If you put each chain on its own line, you can make “maps” of texts (these figures are taken from publications and communications): 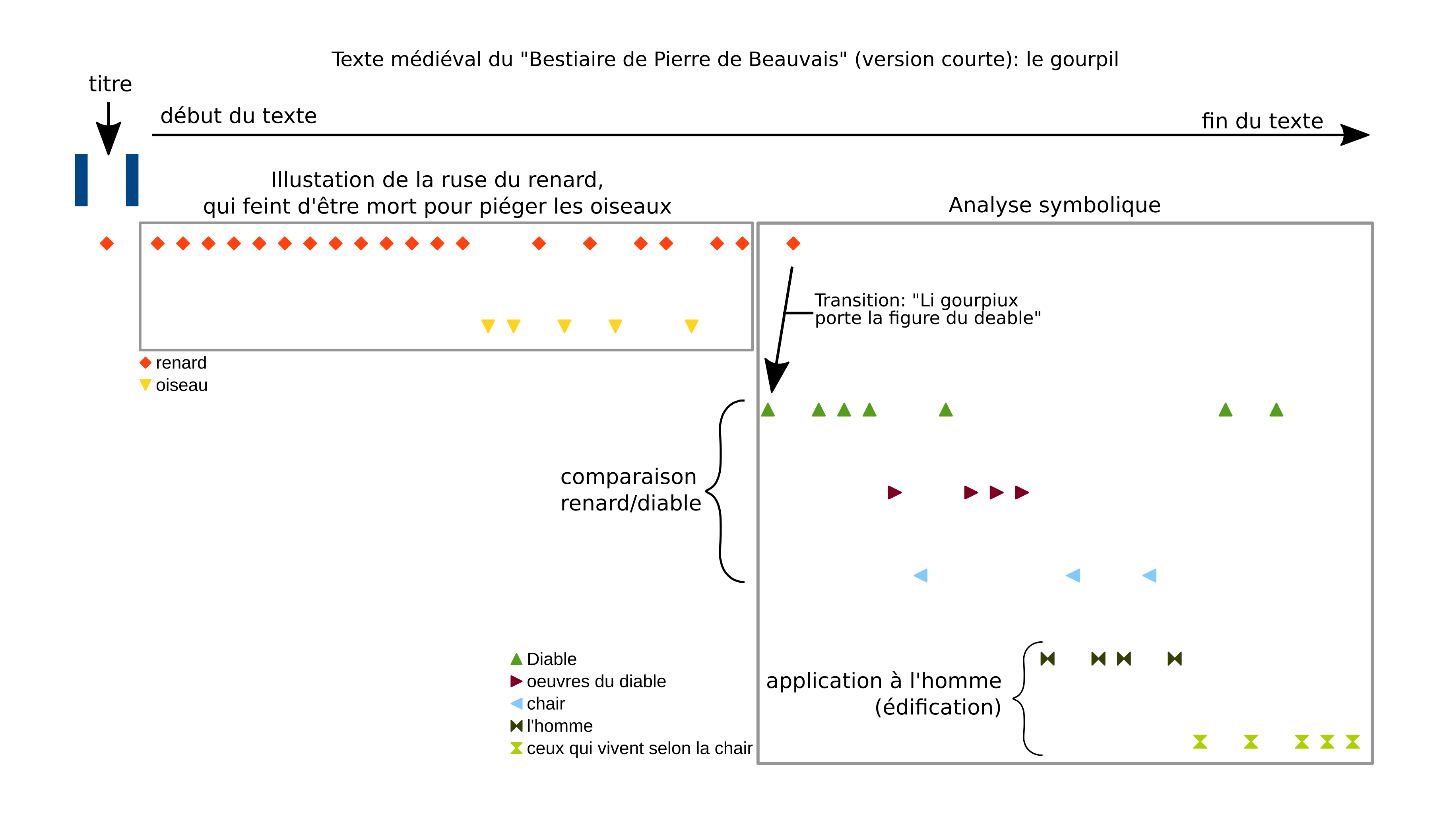 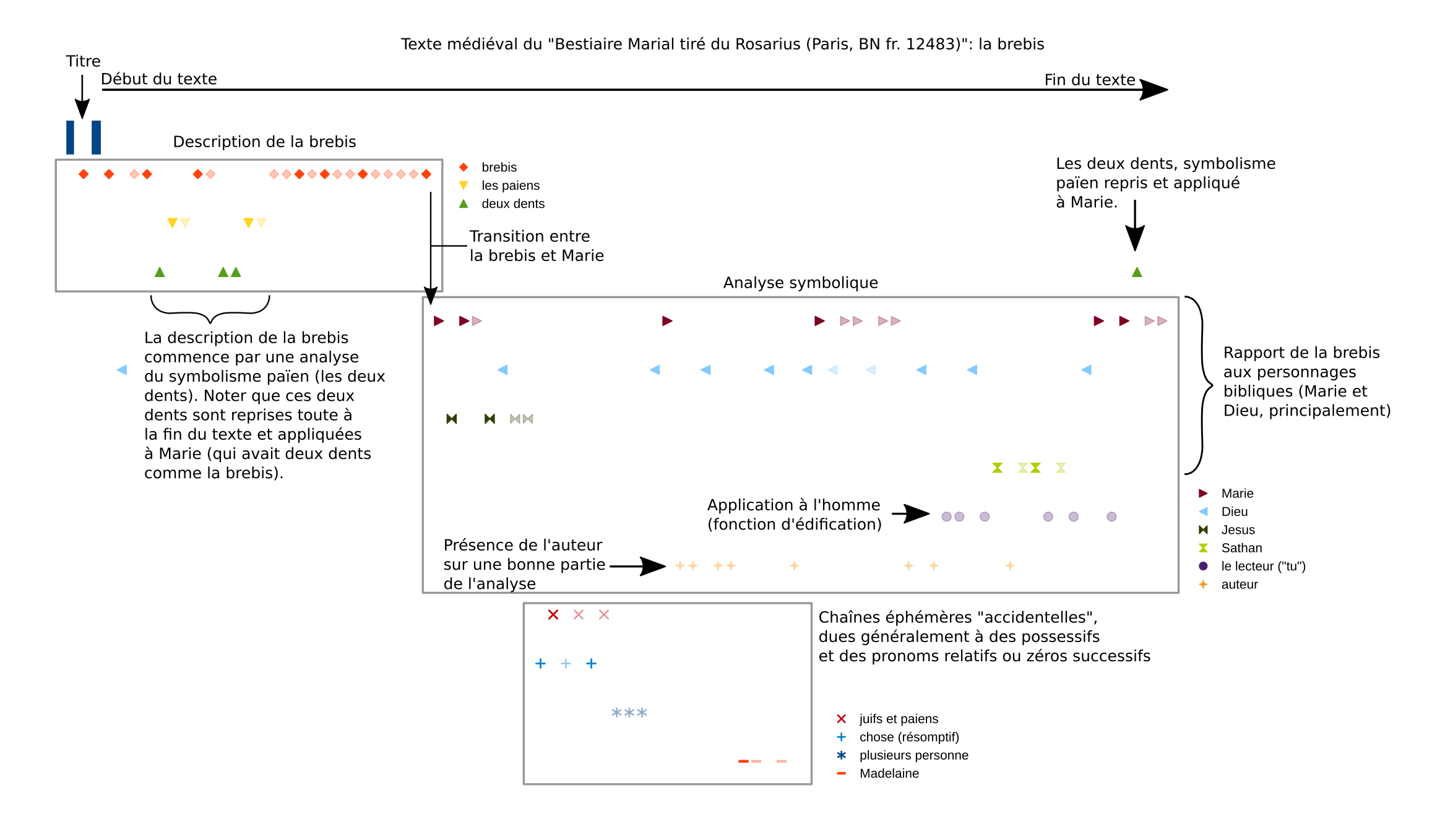 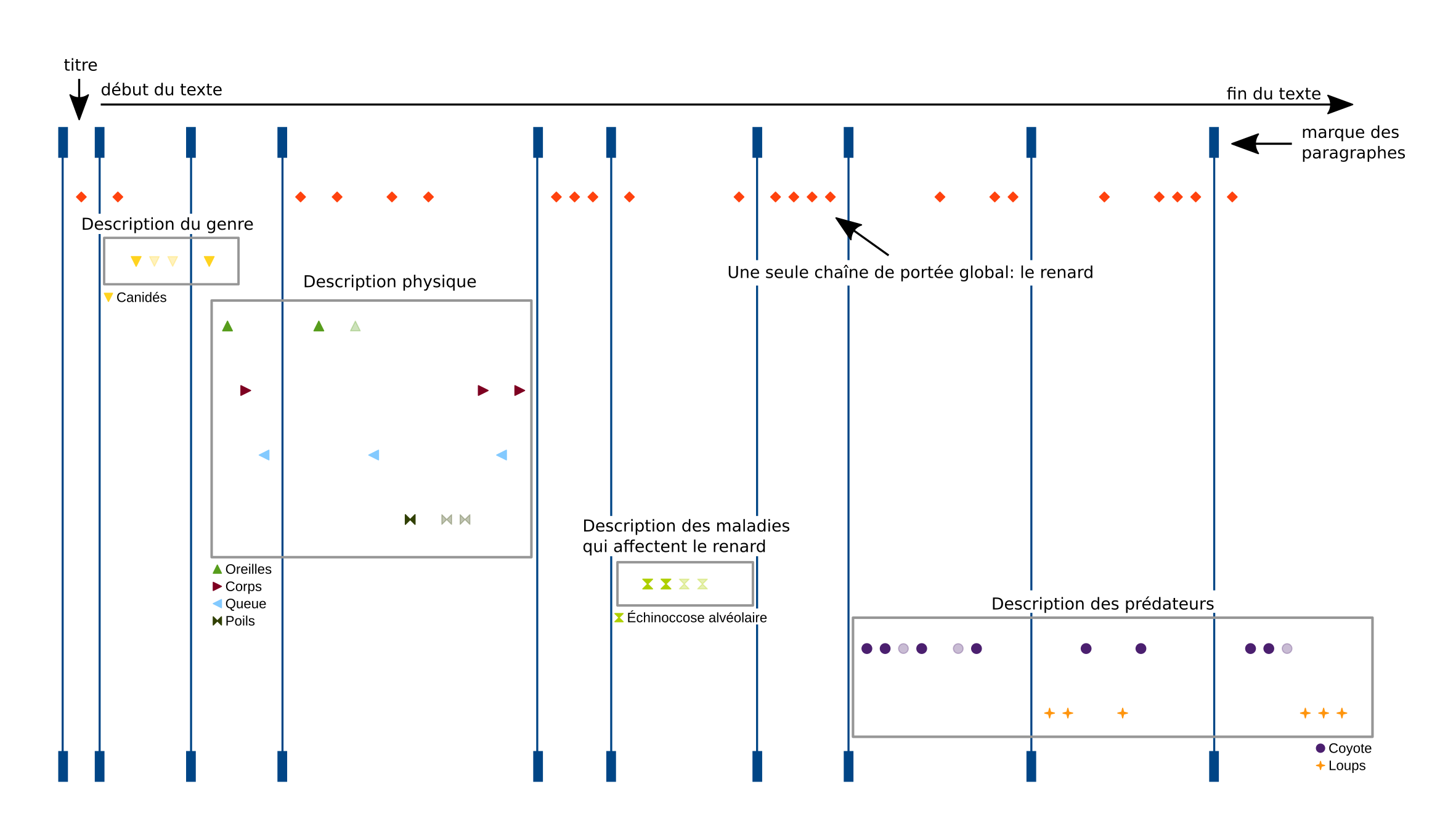 You use the line to indicate the chain, and then use color or shape, or transparency, to indicate other mention properties, like the part of speech (for example, pronouns could be triangle and nouns circles).

Another way of reprensenting coreference relation is to use a chord-like diagram: 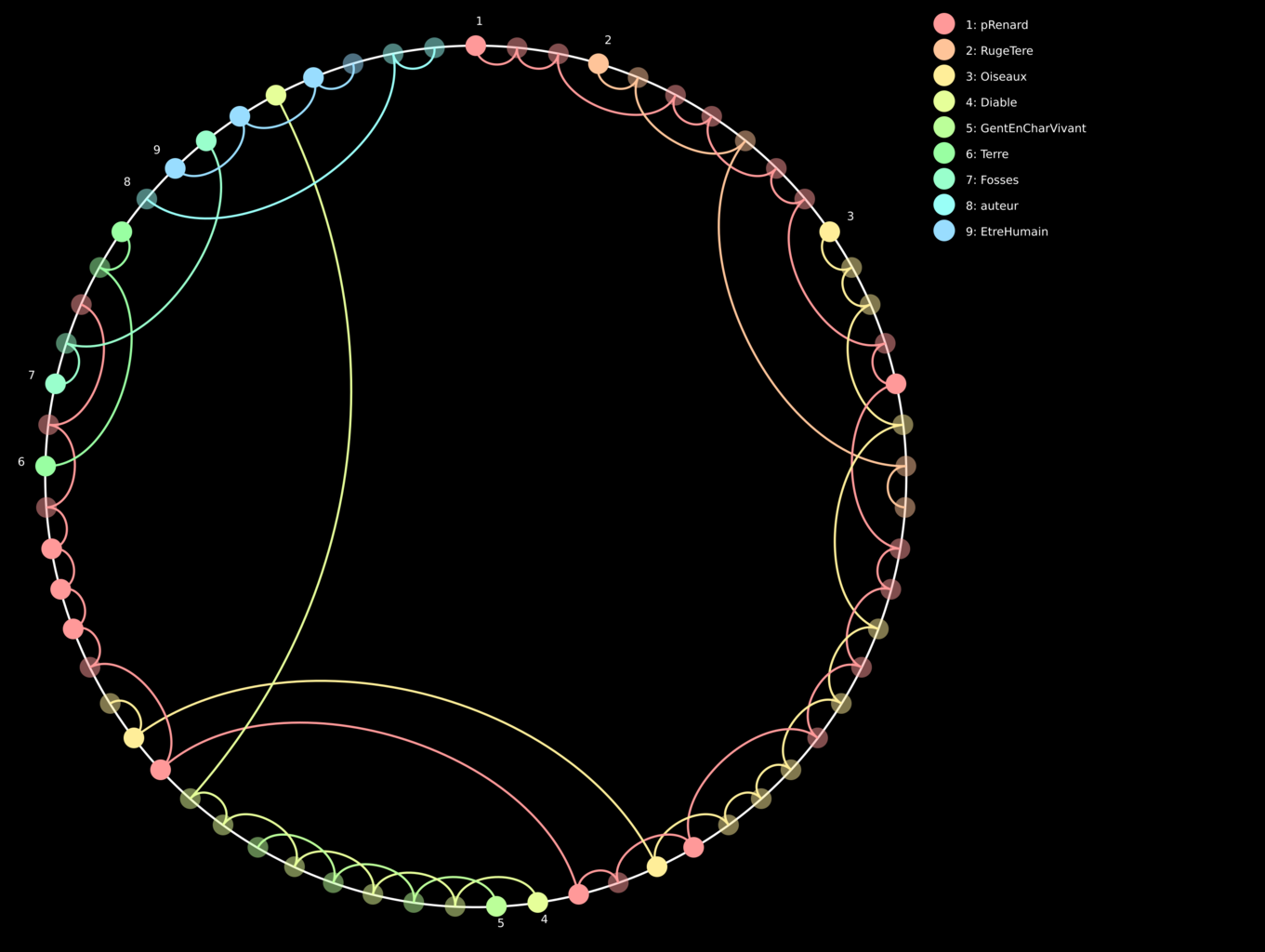 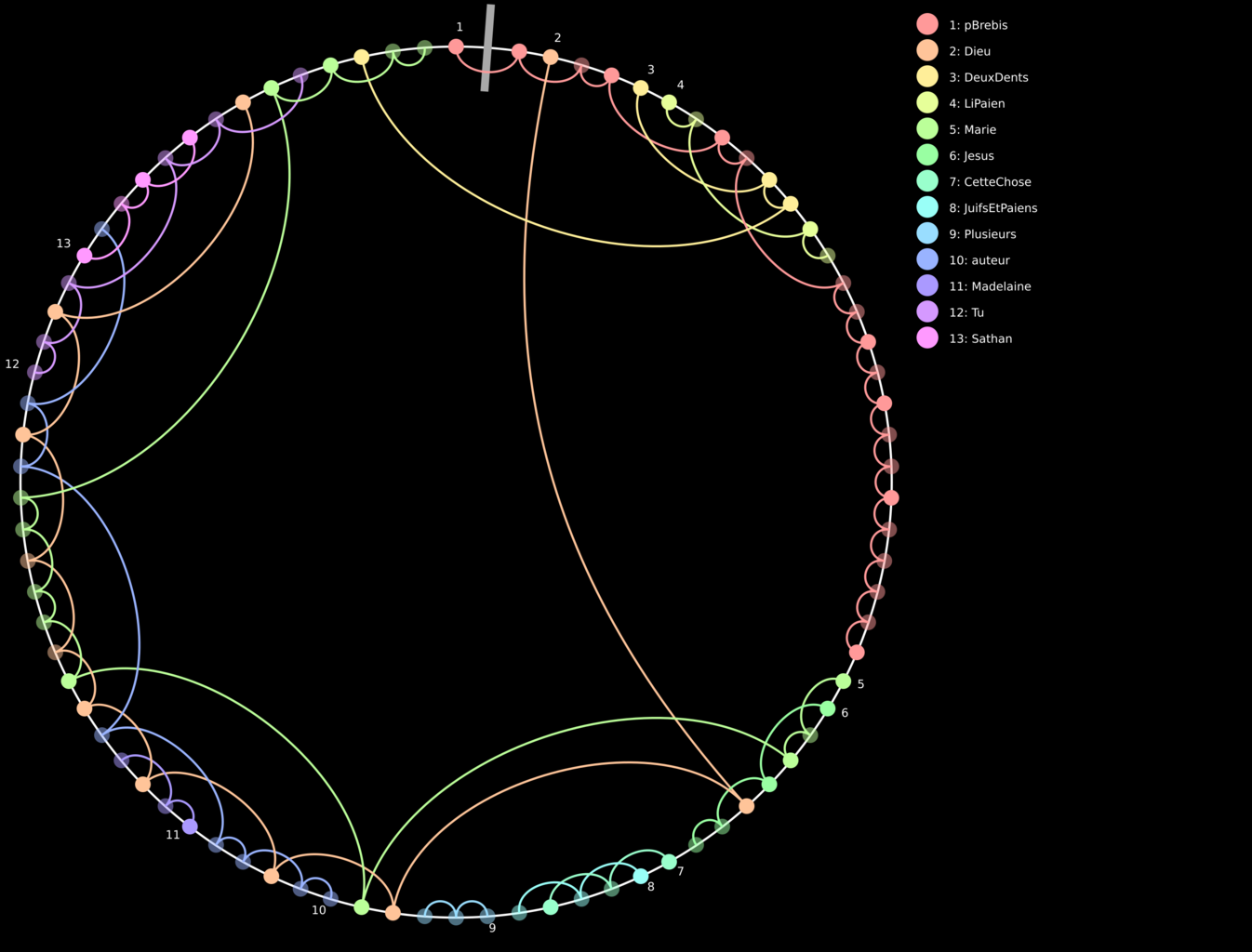 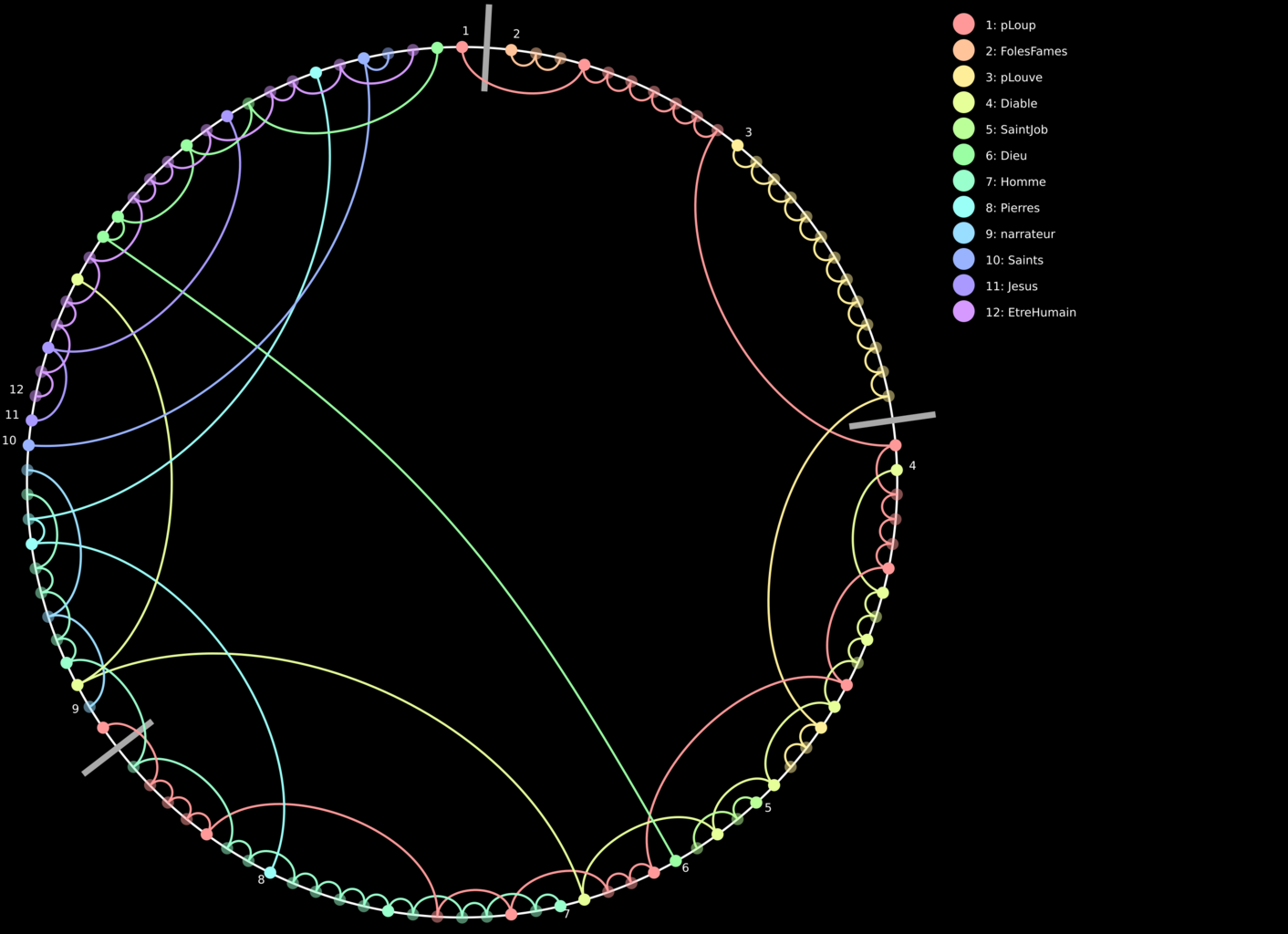 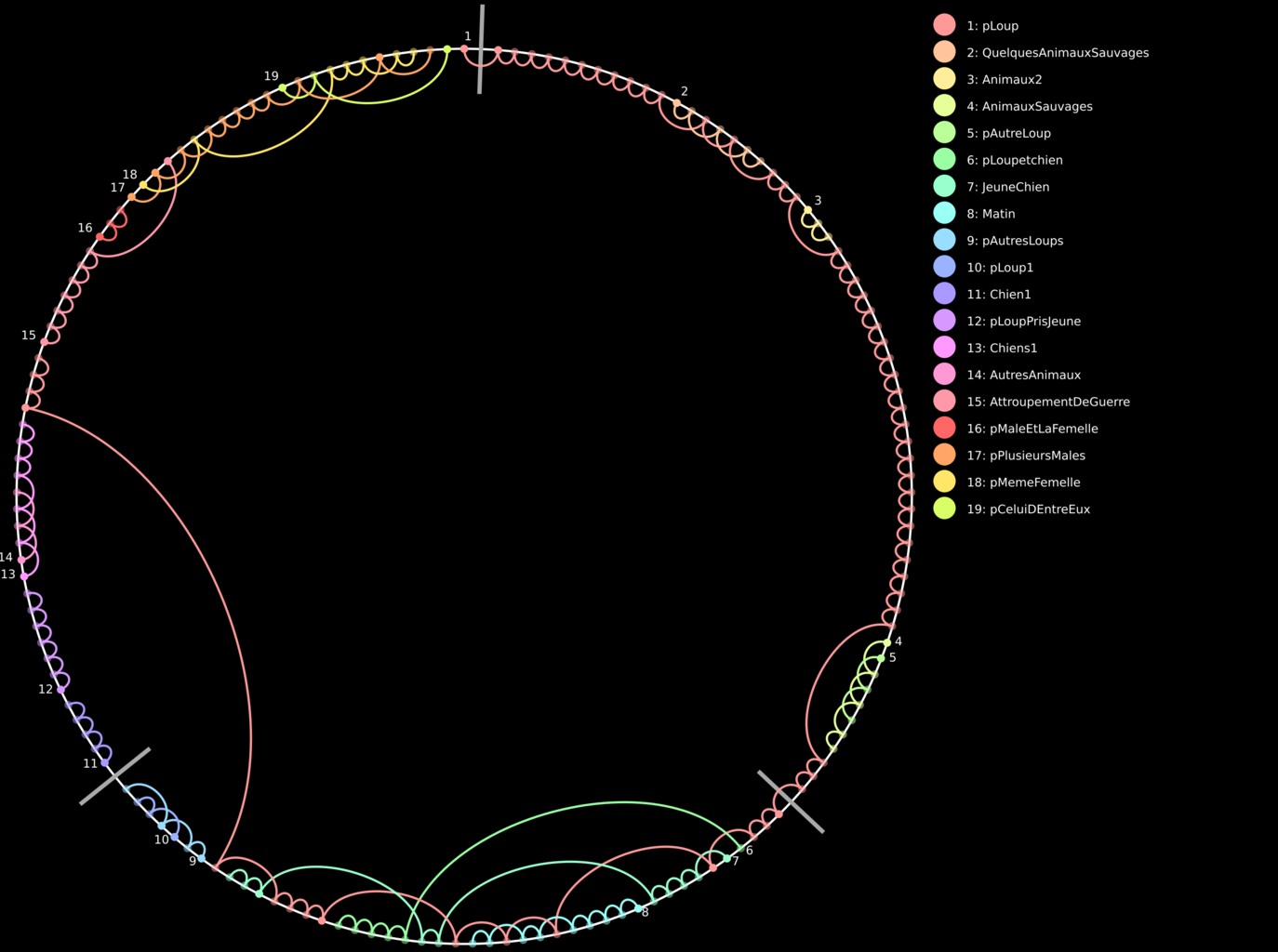 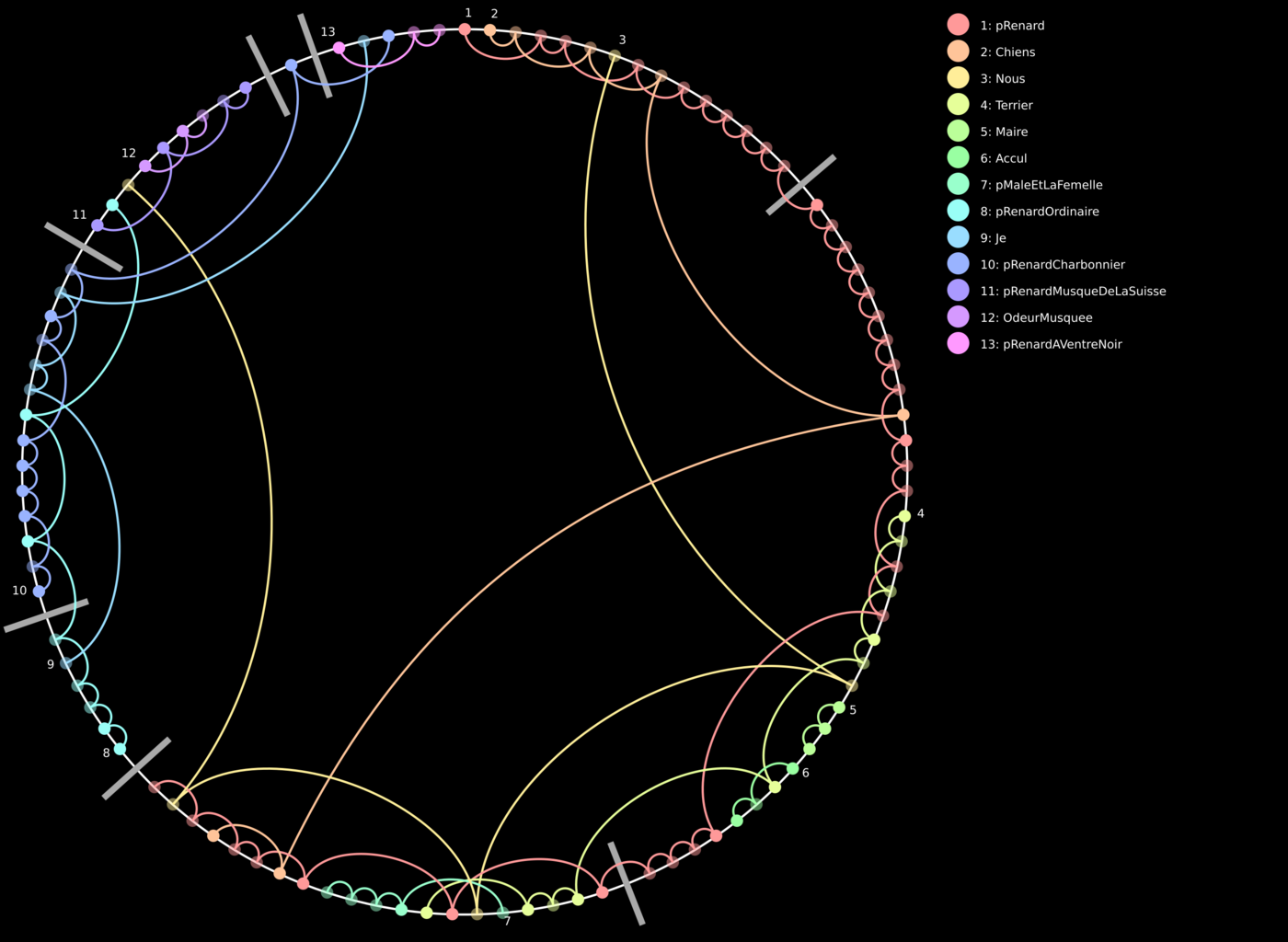 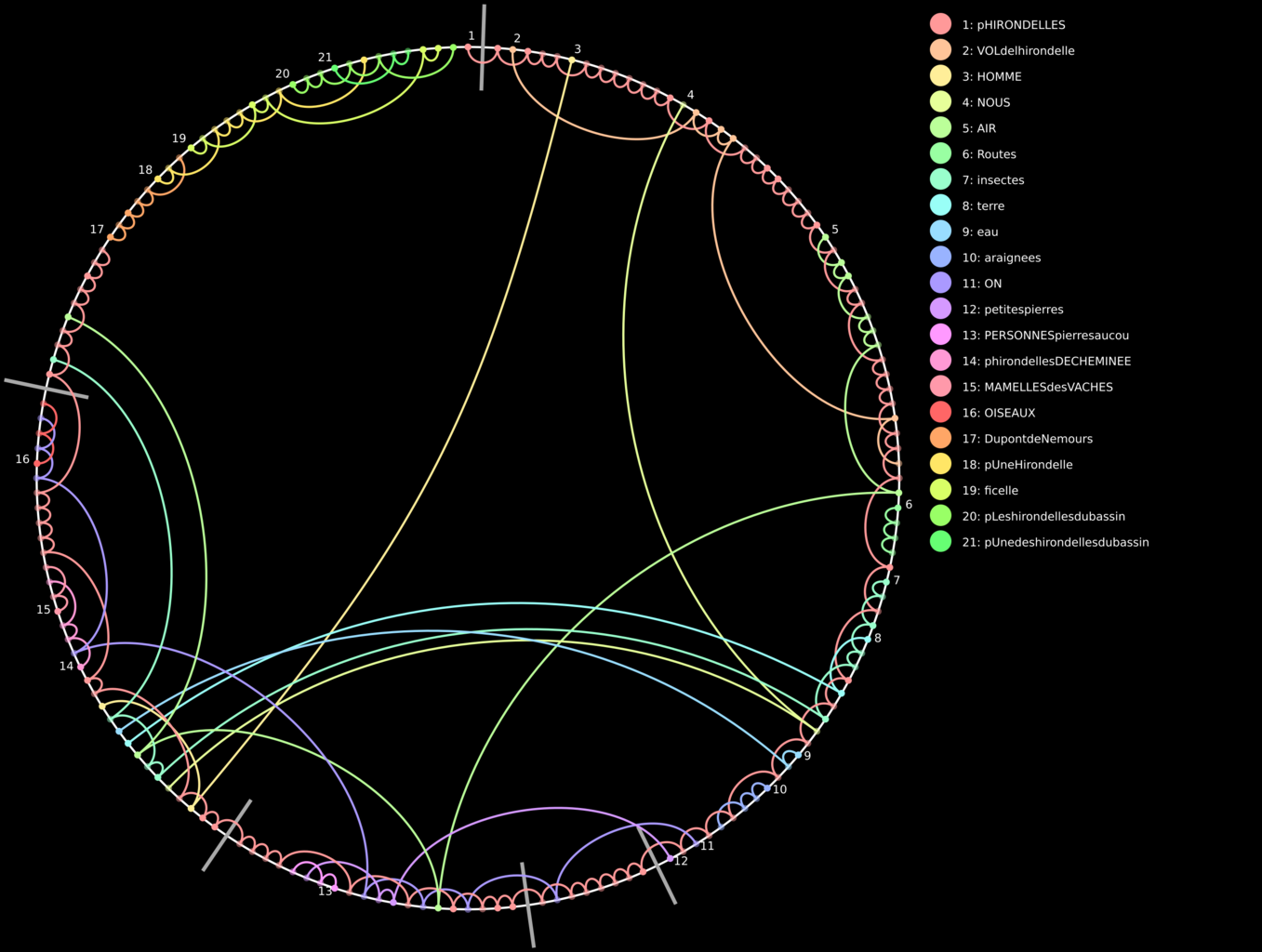 In these diagrams, mentions are placed in order along a circle. This is read like a clock: the beginning (and end) of the text is at the top of the circle, and mentions are clockwise placed on the circle. The white bar orthogonal to the circle are paragraph marks.

All the mentions with the same color belong to the same chain. The lines represent the consecutive relations, so that you immediately see where some entities are distributed in the text.

You can highlight some characters in order to follow them. For example, in the following diagram, representing the beginning of “Les voyages de Cyrus” by Ramsay, you see chain of Cyrus (in blue) and Cassandane (in red). Note that Cassandane appears later in the text (because the story begins with Cyrus being a child). 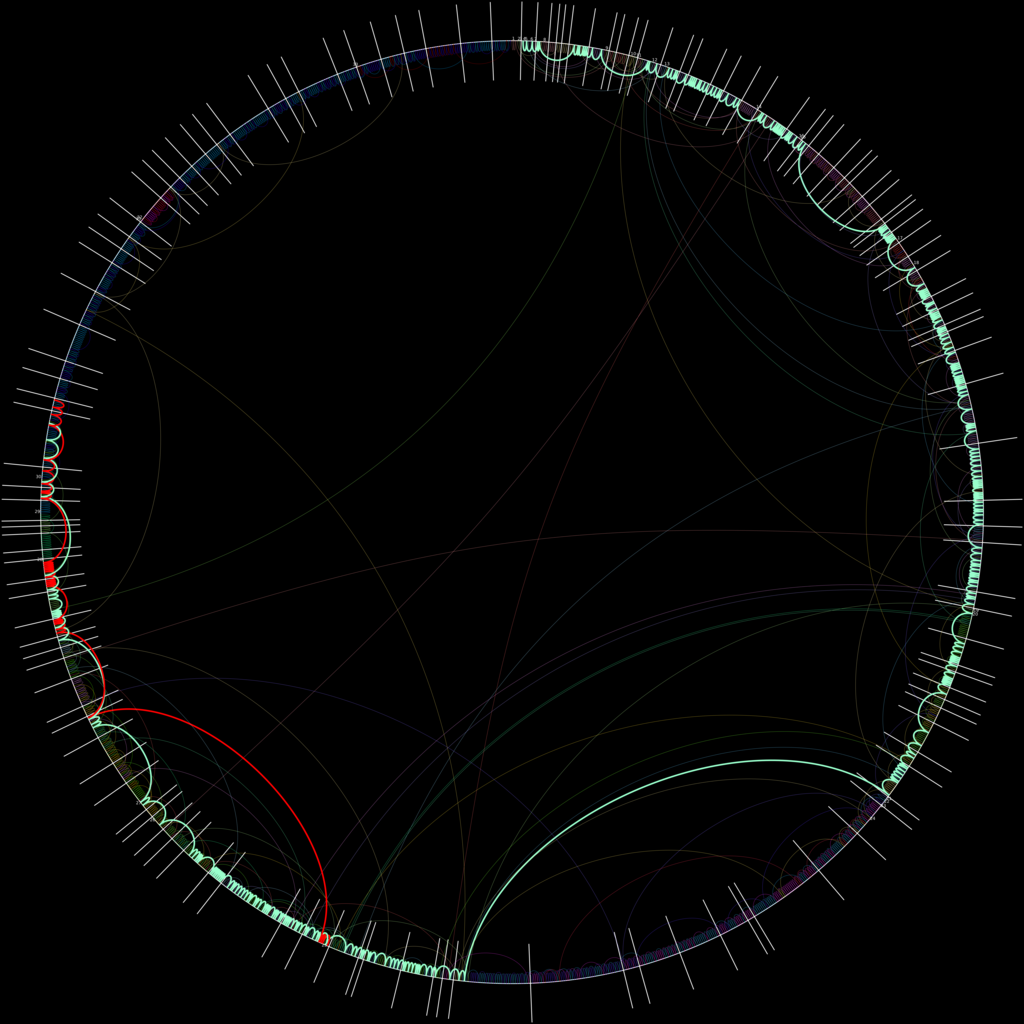 By using a network representation, you can show how entities interact which each other. For example, the next figure illustrate how characters in the beginning of the French novel “Pantagruel” interact:

In the next example, you see the beginning of “Les voyages de Cyrus” by Ramsay. Cyrus is the main character, and has a strong relation to Cassandane (his wife). What is the most interesting, is that you see different stories around the main story of Cyrus: Zoroastre and Salime at the right, Stryangee at the top, Logis and Sigee at the left. This is a characteristic of this text: stories inside stories, and the network representation show that well. 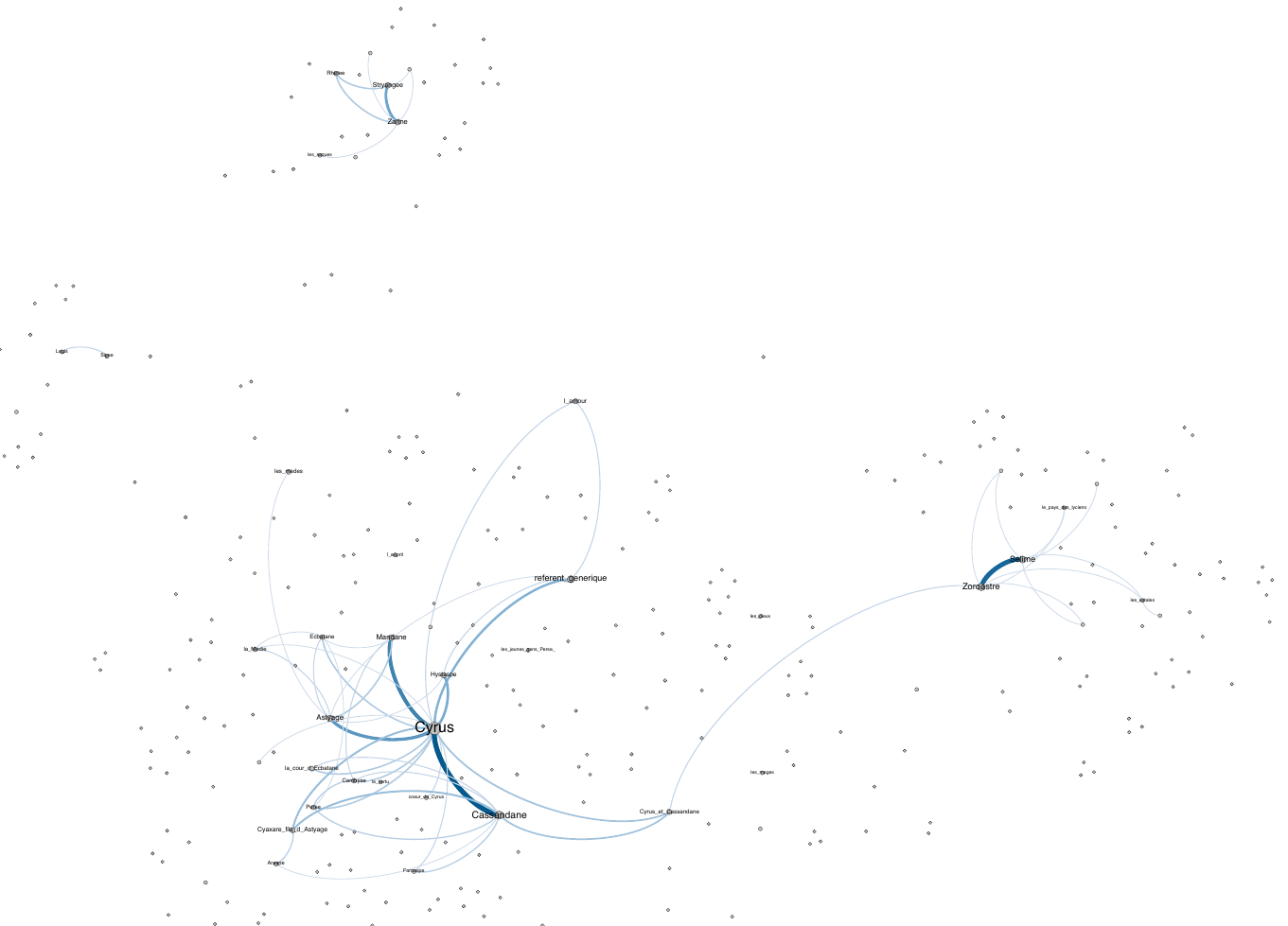