HGT files are Digital Elevation Model (or DEM) provided by USGS and NASA. They are raw date, and need to transform them before displaying them as images: 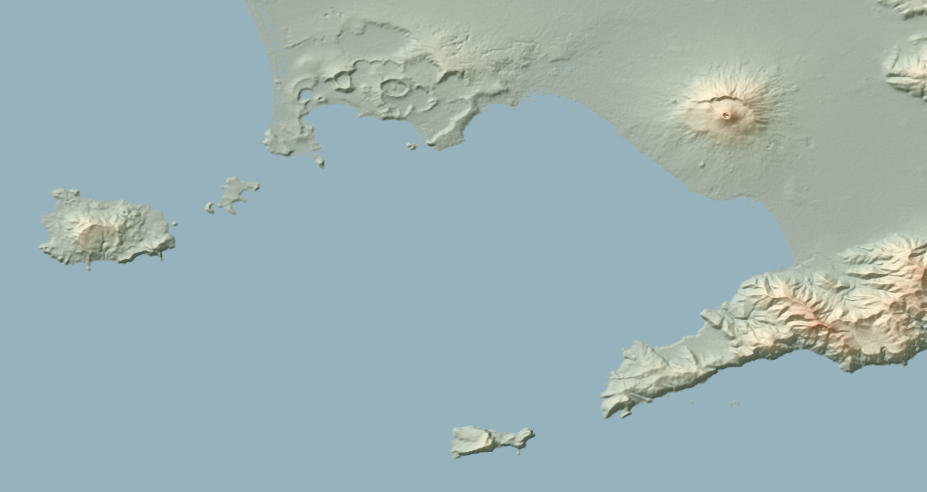 If you are interested in colored elevation map, check out my other project on eleveation maps.

HGT files are data about elevation (Digital Elevation Model, or DEM) provided by USGS and NASA. You can download them here.

The documentation is available here.

Basically, they are an image representation of Earth: each pixel represents 1 or 3 meters (depending on the regions) and contains an elevation value.

They are "provided as 16-bit signed integer data in a simple binary raster." The "byte order is Motorola ("big-endian") standard with the most significant byte first." (doc). This means that they cannot be exploited as is, and need to transformations.

This project contains programs to read and modify them.

This program read an HTG file and outputs a pgm image, that you can convert to other formats. Here is an example of the Bay of Naples, with the Mount Vesuvius:

And the whole island of Sicilia, with the Mount Etna (tiles have been concatenated with GIMP):

To compile and run:

This program print the hexadecimal values of the tiles. For example:

Here is the relevant part of the documentation:

All elevations are in meters referenced to the WGS84/EGM96 geoid as documented at http://www.NGA.mil/GandG/wgsegm/.

Byte order is Motorola ("big-endian") standard with the most significant byte first. Since they are signed integers elevations can range from -32767 to 32767 meters, encompassing the range of elevation to be found on the Earth.

These data also contain occassional voids from a number of causes such as shadowing, phase unwrapping anomalies, or other radar-specific causes. Voids are flagged with the value -32768.

Because the DEM data are stored in a 16-bit binary format, users must be aware of how the bytes are addressed on their computers. The DEM data are provided in Motorola or IEEE byte order, which stores the most significant byte first ("big endian"). Systems such as Sun SPARC, Silicon Graphics workstations and PowerPC Macintosh computers use the Motorola byte order. The Intel byte order, which stores the least significant byte first ("little endian"), is used on DEC Alpha systems, most PCs and MAcintosh computers built after 2006. Users with systems that address bytes in the Intel byte order may have to "swap bytes" of the DEM data unless their application software performs the conversion during ingest.